Ronda is a charming city located in the Spanish province of Málaga within the community of Andalusia. It is approximately 100 km West of the city Málaga. Ronda retains much of its historic charm with its beautiful old town well-preserved. The area is known for its enchanting hilltop whitewashed villages, Rhonda being the most famous. Rhonda is popular worldwide for its dramatic El Tajo gorge carved throughout the centre of the city along with the 18th century Puente Nuevo ‘new’ bridge connecting the city. The bottom of the gorge sits 100m below the crossing, the views out over the Serranía de Ronda mountains are renowned. The population in the city is around 35,000 inhabitants. 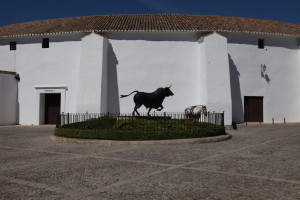 Ronda’s “Plaza de Toros” bullring is the birth place of modern-day bull fighting. The ring was inaugurated in 1785 making it one of the oldest in Spain. Plaza de Toros is home to one of Spain’s most desired ‘schools’ of bullfighting on foot rather than on horseback. Seville and Jerez bullfighting schools are on horseback, the Bullfighter Pedro Romero (1754-1839) has been rumoured of killing nearly 6,000 bulls here and in other bullfighting locations. Its most recent legendary bullfighter was Antonio Ordóñez (1932-1998) fêted by his friend Ernest Hemingway in his book The Fatal Summer. Antonio’s sons and grandsons have also fought at Ronda and today the Plaza de Toros is a museum open to tourists with a small entrance fee. Once a year Ronda celebrates its charming Spanish tradition during the annual Feria Goyesce. The celebration lasts 4 days which includes spectacular Goyesca bullfights in the Plaza de Toros in which combatants dress in the manner of Goya’s portraits of 18th century life in Spain. You will need to plan ahead if you are interested in watching the event inside the Plaza de Toros, as the event is popular with local Andalusians and tourists. 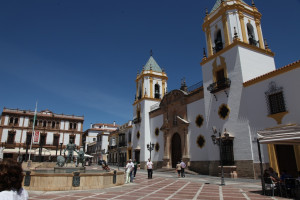 The above photo is one of Ronda’s plaza squares where locals and tourists come to relax and dine at the many restaurants, cafes, and bars that surround the mostly white cathedral. A large part of the Andalusian culture is socializing over tapa dishes, festivals & dancing the flamenco. 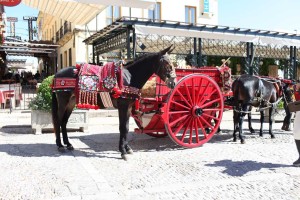 The horses have their traditional dress code too. 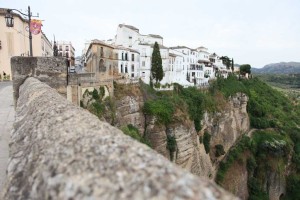 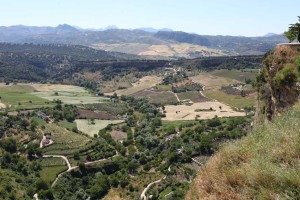 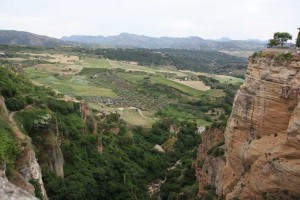 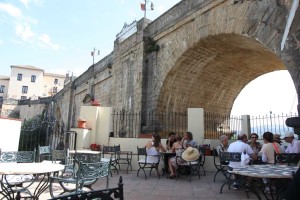 There are several open aired balcony restaurants & bars to enjoy the much-photographed stunning views on the top of the Tajo gorge. 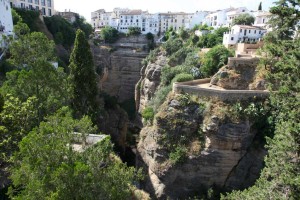 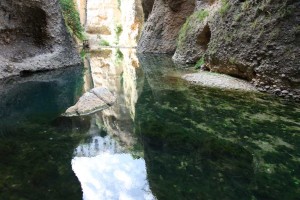 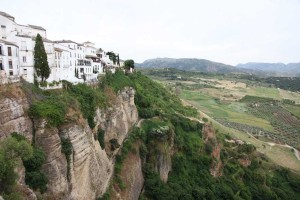 The Puente Nuevo is the newest and largest of three bridges that straddles the 100 metre gorge crossing the Guadalevín River, dividing the city of Ronda. King Felipe V purposed the project of the bridge in 1735, many builders lives were lost during construction of the ‘new bridge’ which was completed in 1793. Sections of the column interiors were used as a prison but are now a museum. Both sides of the Civil War used the prison as a torture chamber, it is rumored the captive were sometimes thrown from the windows to their deaths. 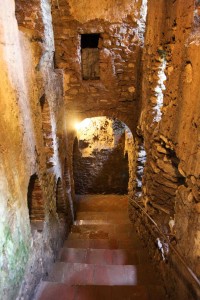 Today the Casa del Rey Moro built-in the 18th Century sits above an important relic of Ronda’s Moorish occupation – called the Water Mine.

In the 14th Century, when Ronda was continually in Battle between the Moors of Granada and the Christians of Seville, Ronda’s Moorish king Abomelik instructed the cutting of steps into the stone walls of the gorge to reach the río Guadelevin below for its water supply.

The staircase was restored in 1911 and is now open today for tourists to explore down through the carved out cave to the pristine waters below. Be warned before you begin your descent that it is approximately 300 steps to the opening below and the only way back up is the same way. Once at the base of the gorge you will find serenity in the trickling of the flow of water & song of the birds blocking the sounds of the hustle & bustle of the city above you. 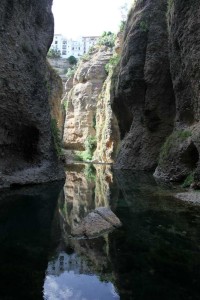 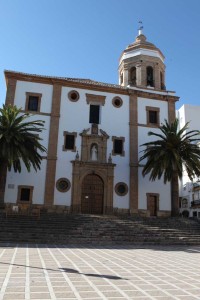 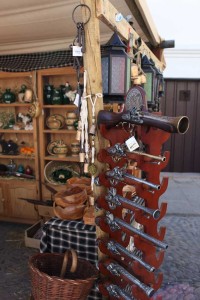 There is great hiking, mountain biking and road cycling in the area for those of you looking for more adventure.

The paved roads are in the most immaculate shape which is a cyclists dream. The almost traffic-free routes are another great pleasure for cyclists while twisting and curving over mountain passes and sweeping down through deep valleys, between the magical white villages.

The several hikes in the area take you over quite & peaceful mountain ranges, grassy meadows, river valleys, between villages, remote farms, through cork and holm oak woods, and along with Roman remains.

On each side of Ronda, the two natural parks of Sierra de Grazalema and Sierra de las Nieves offer beautiful scenery, flora & fauna creating a sanctuary for the out-door enthusiast.