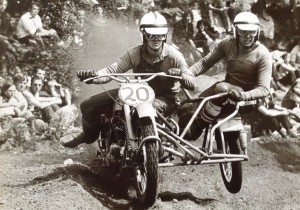 During my travels I was fortunate enough to find a seat next to David Beavis on a bus in Italy. We began chatting and the more David shared of his life experiences with me the more I found myself mesmerized while listening. This man is both interesting and exciting to listen to but also, a person who holds great passion for life and has chosen to live his life doing the things he is passionate about making him inspirational. When the bus reached our hotel I expressed how I would love to continue our conversation asking him to join me at a convenient time for him. Thankfully he accepted and we set a meeting time.

David shared with me parts of his professional motor cross side car career between 1971 and 1980, the love he still has today watching and following the sport, his new found passion for road cycling, traveling, his best friend Rodney and living life with cancer.

David Beavis was born in 1944 at the end of WWII in England and at the early age of 15 he started riding motor cross and then moved on to racing at the age of 18. Soon, Nick Thompson would join David and become his driving partner in motor cross side car racing. The highlight of their career together was April 25th, 1971 in France, winning the first race of the European Championships. It was fantastic watching David’s eyes sparkle and face brighten while chuckling clearly remembering and feeling that moment all over again. 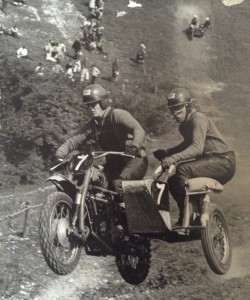 David; “It was great watching other riders open their eyes wondering who these two English guys are that virtually came from nowhere and won the first race of the European championships. We were rookies up to this point only doing a couple international races and just starting to enter the big scene. There was so many bigger names above us that we looked up to. There was over 20,000 people there watching the race, bands playing, flowers and a lot of cheering. We finished 2nd overall in the European season only one point behind first place friends and fellow racers Rikkus Lubbers (Driver) and Bart Notten (Passenger) from Holland. We are still great friends. Still meet up at European meetings for a beer…… or three! 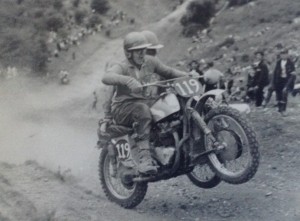 Photo taken in late 1969 climbing a long hill during a race.

Nick and I started racing virtually with nothing. Nick’s Aunt helped us out at the beginning to get us started. After our European championship win we began to get sponsorships. Eventually one sponsor paid for everything for the bike including a new bike each year which kept us going. The motor cross side car community and atmosphere is great! On the race track it is one thing, but off the race track we were all good friends. Everyone would help each other out to keep us all racing. If someone needed a spare part, someone else would give it to them. It is one big family. Throughout my career in racing I had my share of injuries. I damaged my right hip, broke my left leg, nose and had many other injuries. They healed and I kept doing it. 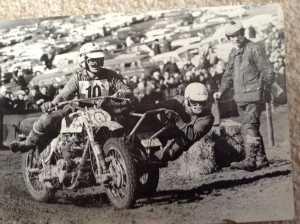 Photo from 1970 with 3 cycling engine. The man standing in the photo was a sponsor who paid for our bike. 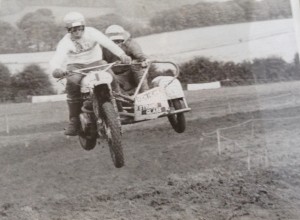 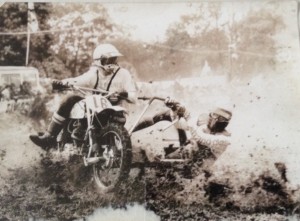 Nick Thompson and I had a good relationship which is the most important between driver and passenger. My job was to help with balance and let him know where the other racers were. I would tap him on the left or right to let him know if someone was moving up on us. He focused on looking where we were going and driving. When I retired at age 35 Nick Thompson carried on with another driver. The sport remains in my blood. I love it! Today I still feel the same excitement when watching that I felt when racing. I had two sons with my first wife. My oldest son Ian Beavis went into the sport as a passenger racing with Colin Philpott. They won second in the British Championships twice. 1998 and 2002.

Outside of motor cross side car racing David shared stories about his best friend Rodney who I was fortunate enough to meet at the Belvedere Bike Hotel in Riccione Italy. These two guys were great fun, interesting, good for many laughs and the definition of true friendship. They both have gone through plenty of ups and downs in their lives including facing losing their health. To anyone that has actually faced this themselves or with a loved one knows the strength & support you need to help through the healing.

David was diagnosed with cancer in 2003 and originally given 5 years to live.
He shared with me that when he first went into the hospital for chemo, he was there for four months.

David;” I lost all my hair and was really sick from the medication. The best news I received from my doctor is that I could go home for Christmas. I called Rodney right away to tell him. Rodney was really excited for me. He mentioned on the phone that he had a big meeting scheduled the day I was going to be released, I told him not to worry about it.” I could hear and see the emotions in David as he continued to share with me that less then 2 hrs later Rodney called him back at the hospital to say he cancelled his meeting and would be there to pick David up at the hospital. “He is crazy” with a big smile and lots of emotion followed by that is the kind of guy he is. It was the best Christmas!

The two are neighbours in England and travel alot together. They both hold a passion for road cycling and frequently go on cycling tours carrying their own luggage. “We usually head to Heathrow airport jump on a plane with our bikes and ride out of the airport we land in turning right or left spontaneously. We’d cycle till about 5 O’clock then find a place to have a beer, find a room in that area for the night and the next day jump on the bikes again till about 5 O’clock and repeat checking out new places.

We found Hotel Belvedere by mistake originally, we booked at San Pierre in Riccione on our first visit to Emile Romagna, Italy which was run by Marina’s mom. We have continued to come back for 16 years and we love coming to the Belvedere every year to see Marina, her team and meet the different guests. I met my girlfriend through Marina at one of her Belvedere New Years Eve parties! It is a special place where everything is put together so well and we do not have to think about anything when we are visiting. The Belvedere is a nice atmosphere and the food is great! I enjoy following the sea and having a good cup of Italian coffee during my visits too.

Rodney and I have some stories from our years of coming to the Belvedere. Once I crashed hard on my bike in Riccione breaking my pelvis. I was all scrapped up, Marina brought a brand new wheel chair to my room unwrapping it in front of me. Rodney pushed me everywhere in that wheel chair and we went out every evening for a beer together, it was great! Then on another trip Rodney crashed on his bike, he was all scraped up with his arm in a sling and I had to help take care of him. That is what real friends do for each other.

The two best mates know the meaning of true friendship and how to enjoy their lives. Twelve years later David continues his journey of living with cancer and during our conversation shared the following “I do not let my sickness stop me from living and doing what I love. I live by myself and have for a very long time. I still do all my own house cleaning and shopping. There are some days when the medication makes me feel very sick and exhausted to the point where I do not want to get out of bed. My doctors response to this is the grocery store will always be there and the cleaning will wait for you David. I have learned to listen to my body now and if I need to rest, I rest. We were actually scheduled to come to the Belvedere last September though after a treatment my doctor told me that I couldn’t fly for 6 months so we had to reschedule our trip to Spring. I have always been positive. Nature will do its job or it will not. When a serious illness comes into your life your outlook on life becomes different. We must accept what happens along the line. Accept life as it is. 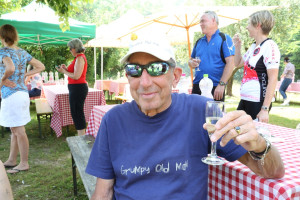 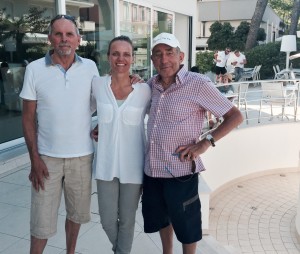 Rodney, Myself and David June 6th, 2015 at the Belvedere Bike Hotel in Riccione, Italy.